How do you find penpals? - updated.

Back in 2012, I wrote a blog post called How do you find penpals? Although the details there are still valid, I would like to add a few more details. I'll repeat most of that post here.

So, how did I find penpals?

Well, in school, I filled out a form for a youth penpal service, though I can't remember which organisation it was. I paid for some penpals and received some letters. However, as a teenager, I found myself busy with other things, such as homework and being with friends. So, unfortunately, penfriendship dwindled.

Then, as after leaving university, I wanted penpals again. I bought a free ads paper and saw that there was a form to place an ad internationally through their sister papers. I placed an ad in 10 international papers and received some letters. I still write to one of them.

Then, when I got my first computer, I wanted some penpals, but only found people who wanted email friendship. One even got worried if I did not write daily. I gave up for a few years.

Then, in 2008, I decided to try again for snailmail penpals. First port of call was PenPal International and had  found a few people to write to. However, the letters stopped (maybe lost in the post, or they stopped writing). I also tried Interpals and found more people that way. However, it was the same old story, the letters stopped. Also, some who said they would write the first letter, never did (or it was lost in the mail). One thing good about Interpals was that I discovered Postcrossing and this satisfied my hunger for nice mail, with postcards to and from all over the world. I discovered their forums (fora?) and found penpals through that, although not everyone continued their correspondence with me. I have tried other penpal websites but ...

Some penfriends started sending me Friendship Books (FBs). These are little booklets, sent with letters for people to write their name and address in, perhaps a bit about themselves and abbreviations such as NPW (new penpals welcome), NNSP (no new swap pals). I haven't received any letters via this route. I had started to make my own, first sending them around Spring 2009, but none have made their way back home, even 6 years later. 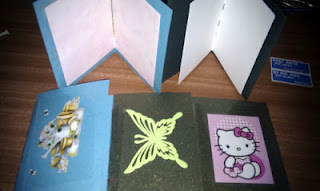 These are a few I have made. I sew the paper into the cover, rather than using staples. I haven't sent many new ones recently. Comments received on the original post had concerns of where these friendship books go, some could be sent to prisoners, or to those who are not really interested in letters.

Another site I found for penpalling, well, is mainly a craft and swap site called Swap-Bot. Almost anyone, over the age of 18, can create a swap, people then join and when the deadline for joining is over, the host of the swap checks through the profiles of the people, and if all is well, tells the computer to assign partners. I have joined postcard, letter and Christmas card swaps. I haven't hosted my own swap (I would automatically join the swap). As I write this blog entry, popular swaps include various ones for Artistic Trading Cards (ATC), postcard swaps and pocket letters (in a 9-section trading card sleeve).

In 2012, there was The Month of Letters Challenge (LetterMo) for the month of February. The challenge was to send an item of post (postcard, letter, ...) every "postal" day, so this was 24 days for USA. I had mail ready to go out every day, but missed the last postal collection on one Saturday, so instead of letting the item be lonely in the postbox, I kept it at home until Monday. I wrote to new people who were doing this challenge, and have developed a penfriendship with some of them. I also took part in 2013. However, outside of just before February and a couple of weeks after, the site's forum was neglected.

In 2014, I joined my first InCoWriMo (International Correspondence Writing Month) signing up on the fpgeeks forum. This is similar to the LetterMo challenge and I wrote/received letters to/from a range of different people. I might not have written to them if they had instead a profile up on Interpals. It was quite a freeing experience, not constrained by gender, age, preconceptions - just correspondence. I am still writing to some people from the 2014 InCoWriMo. I signed up again in 2015 but didn't take part in LetterMo.

I have also found friendship via SendSomething. There are other sites available, e.g.  The Letter Exchange  (something I haven't tried yet, but they have a magazine, and is a subscription service), and Letter Writers Alliance (I am a member).  Instagram and Tumblr are other sites becoming popular to find penpals. You can get ideas there too about snailmail. There are groups on Facebook but caution is needed there too (I recognise some names from other sites where they haven't been reliable senders)

New up though is a forum and monthly project Five Questions 5 Letters. I have some new correspondence from that and it is looking promising.
Posted by M at 11:22