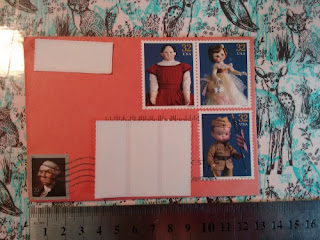 Post arrived early today, just one letter. I haven't opened it yet, as I'm waiting for my cup of tea to brew. I also can't drink tea while it is boiling hot.

Those Doll stamps look good, but they do take a lot of room up on the envelope. 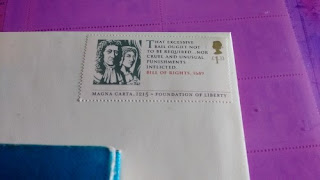 While on large sized stamps, Royal Mail have issued some large stamps recently. This issue marks the 800th anniversary of the Magna Carta - Foundation of Liberty. The stamp I used here has a section of the Bill of Rights, 1689. 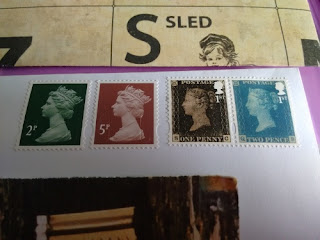 Most of the special / commemorative issues Royal Mail produce are on the large size, bigger than the Machin stamps, however, the stamps issued for the 175th anniversary of the Penny Black and Twopenny Blue, are small. I did however have to order online from Royal Mail for these stamps issued in a miniature sheet. The post office I now buy the commemorative stamps hadn't been sent any of this issue.
Norvic Philatelics blog asks: Are modern British commemorative stamps 'generally available' ? For the Penny Black commemoration - NO, but for the other issues, I no longer have trouble.
Posted by M at 11:01 No comments:

Royal Mail in their wisdom, have decided to put plasticky plaques on postboxes depicting a stamp associated with that location. 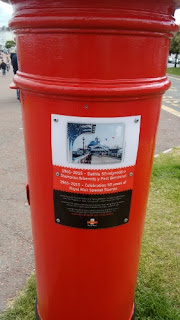 This one features Llandudno Pier (from a miniature sheet for the Piers, Proms and Pavilions issue marking seaside architecture). This postbox is on the land side end of the pier. 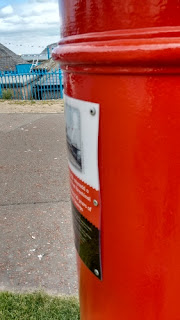 It looks a bit shoddily attached, reminding me of ill-fitting blouses with the gaps between the buttons gaping. 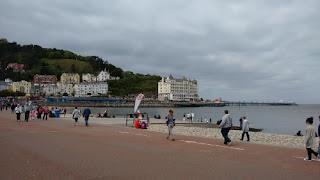 The postbox is to the left of the blue building. The pier stretches far to the right.
Posted by M at 20:50 1 comment:

One of my homemade seals. Upside down on the envelope... 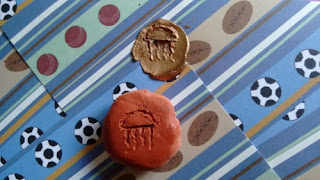 I had gotten bored(!) one evening and made lots of envelopes. 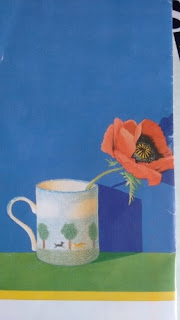 A letter for me arrived wrapped in this paper. I do like my cups of tea, and flowers.

A very kind correspondent sent some used stamps for my son. I like the value given for the letter (opinion!)
Posted by M at 18:56 No comments: