The 27th day of February and the month is almost over. I have been participating in writing a handwritten letter ever day (well, sometimes more than one) over at incowrimo-2017.org and have thoroughly enjoyed myself. My name and address even made it on the shortlist of real people, most I hope would be down to earth, genuine people.

Don't get me wrong, but although A Month of Letters (LetterMo) and also International Correspondence Writing Month are worthy projects, I no longer feel they are for me. You get more points writing to a government representative than you do replying to a letter someone has taken the time and effort to write & send to you for LetterMo. Whereas InCoWriMo's shortlist of people include CEOs of pen companies and the like, plus a few celebrities. Also, although there is a place for putting your address, the Disqus system of comments isn't easy to navigate (although it does give you notifications if someone has replied to your comment). I did notice that neither of the two people who've updated the site have replied to any of the comments/queries posted. 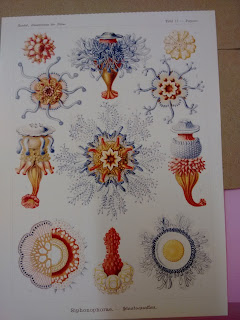 I have received many lovely letters and cards. I absolutely adore this particular postcard of the jellyfishie things. I have a soft spot for invertebrates and love the beauty in their simplicity. I have already replied to this surprise, and have many others still to reply to. It is only fair to respond (although I suspect the CEOs on the InCoWriMo shortlist might not respond to all the letters they've received, and one who was listed was Prince Albert the Duke of Edinburgh definitely won't be replying, but the name was corrected in January).
I expect there'll be a few more items on their way to me, and may indeed arrive in March. I will still respond to them. 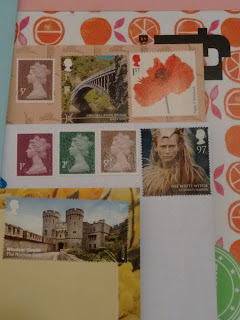 I have also been surprising a few new people too, picking names/addresses out of the air to write to at the weekends. This past weekend, I only wrote 2 surprises, but I could write surprises tonight and tomorrow!

During the week, I have been replying to letters, both to surprise letters and to ongoing correspondence.

Something I treated myself to was the Flow Book for Paper Lovers. Actually, 2 issues, one arrived last month. I am thoroughly impressed with this even though not everything in it is suitable for snail-mailing.


I am planning a future post about whether these February projects are a good thing - do they prompt letter writing in the other months of the year? Are they a bit too competitive (the points system on LetterMo)? Is it a bit too arbitrary, with targets and quotas? Is it over-hyped? Perhaps they rekindle your love of snail mail you had in your younger days. Would you recommend them to your "real-life" friends, family and work-colleagues? On my forum there's a poll, and also other discussion about this: http://s-mail.proboards.com/board/29/incowrimo-2017-chat

With over 300 people signing up on incowrimo-2017.org website, how do you choose who to write to for InCoWriMo-2017?

There are a few people from exotic places such as Suriname, Mexico, Serbia, New Zealand... I could write to people whose addresses have intrigue.

There are many streets named after people - first names, surnames or even their full names.

Then, there are roads with nature in mind - hill, creek, woodland, valley. Do deer go down the path and lane?

There's roads with names of buildings, e.g. church, station, also other places - Sheffield, Dallas, Newport, although none yet who live on a London Road.

As for place names, many are not unique. I didn't realise there was a Whitby in Canada, but this isn't the Whitby of Dracula-fame. As I write, 3 people have signed up from Plymouth - one is in the UK, and the other two are in different states of the US. I wonder if they will write to each other.

The weekend of the 4th & 5th of February saw me scrolling through the address book and at speed. I was selecting an address from what was on screen when the scrolling stopped. I wrote 4 letters over the weekend and these have now been posted.
Posted by M at 00:10 No comments: