In my last post, I was perhaps lamenting not receiving many surprise letters via LetterMo and InCoWriMo. Well, it was early days. Now, I have over a dozen letters from penpals as well as new contacts. I had a look through my incoming/outgoing logbook, aka my page-a-day diary, and worked out the breakdown this month, up until and including the 20th.

Sent to people met through:

Received from people met through:

If I had the inclination, I could check back through my correspondence logbooks/diaries to see from where I had found people to write to, and work out the success rate. I can tell you that Interpals for me has a 0% rate except that it introduced me to Postcrossing where I have found success with finding penpals. I can say that the InCoWriMo/LetterMo penpals have overwhelmingly been quite successful for longterm correspondence, more so than searching through profiles on various sites.
Posted by M at 20:10 No comments:

InCoWriMo/LetterMo - deciding who to surprise!

One of the questions popping up is on how do you decide who to write to for LetterMo/InCoWriMo if you do not have ongoing correspondence/friendship.... I joke that I put the names in an imaginary hat and pull one out! What I actually do, is read a few profiles of those participating, and decide on that (whether they say a lot or not), who to write to. Maybe I have been to their hometown or nearby, or we share other hobbies and interests. However, too much commonality I think sometimes does not lead to a successful correspondence (repel - magnets?).
So far, I have received one surprise this month (still early days), but have sent 4 letters to new people.
Posted by M at 22:49 1 comment:

Almost two weeks ago, I decided to start a new address book because I'd filled up all the spaces for surnames beginning with a certain letter. I've now come to the conclusion that I do not like the address book. The addresses look lost in the space given as I do not require a person's email address or various phone numbers. 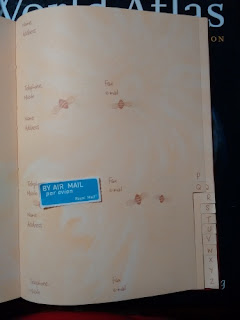 Part of the problem perhaps is the size of the book. I'm used to a slimline book, but this is A5 size. 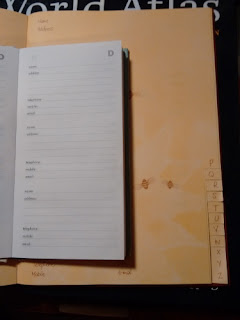 I do have other A5 address books yet to write in, at least one has two columns so I could fit more than 3 people on a page.
Posted by M at 17:12 No comments: