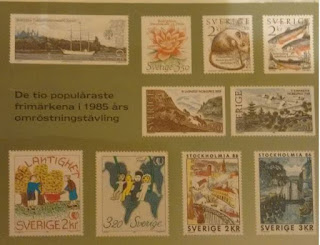 When I last visited my mother, I was looking through things and one of the things I found was a postcard written to me by an overseas penpal. I don't remember the postcard at all, nor even the written words on the back. The postmark is faint, but I think it was posted in 1995. Part of what was written on the back is as follows:

Dear Mia, because you did not write me for long, in my fantasy you've reacted negatively to my last letter. Maybe it sounded blunt, though there was no bad meaning, I assure you. I'm no rude man - I'd be very sorry. Please write me again, and I promise to be more conscientious in my way.

I did write back. I can't recall the bluntness. I have kept (almost?) all of my letters so maybe I should look through them to find the reason. I do know it was not a request for marriage, love, intimate relationship, or money.

I haven't written back to everyone I have received letters from. I sometimes wonder why my letters did not get replied to. Maybe a couple got lost in the post but that would not account for all that yielded no reply. Possibilities I can think of:


- They can't read my handwriting - I have adapted my writing especially to those where English is not a first language. Some handwriting styles take a little longer to decipher than others, even if neat too. I'm planning to do a blogpost on handwriting and intend to show the written dates and the greetings/salutations from my received letters.

- There's no click, connection or sharing of interests, although I take this to mean "I don't like you." I don't  place much importance into having many common interests/hobbies. As well as friendship, letters are a voyage of discovery I have looked up things mentioned in letters to find out more.

- Time and money. For a while, life's events meant I was busy and had other priorities. Money may be an issue for some, especially if they've been made redundant or have incurred an unexpected costly bill.

- Wrong end of the stick. Some might want more than penfriendship, but this is not reciprocated. One letter I received in the 1990s was from a couple who wanted me to write about my, wink wink, fantasies. I was 'young' and not comfortable with writing and exploring intimacies.

- Mentioned on the forum, one reason for stopping writing was because a penpal had forgotten a birthday. I know I miss penpals' birthdays, and I don't always say "Happy Birthday" when Facebook reminds me.

- Gifts and extras - one correspondent ceased to write to me when I would not send a photo of myself back. I do sometimes enclose things with letters, such as postcards, photos (mostly not of myself), and newspaper clippings. I do not expect extras in return. There should be no obligation to send gifts, even if something has been posted to you.

Are there any other reasons?
Posted by M at 16:41 No comments: