February is almost over for another year and InCoWriMo / LetterMo draws to a close. Apart from having flu early in the month, I have enjoyed writing missives to strangers. I have written some responses as well - but March is looking like a month full of replies.

One question that could be asked of me - why write to new people when you have plenty of penpals already? My response would be that I see this month as bringing the joy of letters to new people, perhaps trying letter writing for the first time or  since childhood. Making new connections also makes the world a smaller place.

Although it would be nice to have a reply, or at the very least a thanks either by snail mail or by electronic means, I am in part glad that not every InCoWriMo / LetterMo letter sent will not  yield long term correspondence. I know I cannot write to everyone. I respond to almost all InCoWriMo / LetterMo letters via snail mail. It may take time. I think I will be kept busy if I want to reply within a month of receipt.

Some letters do not have a hook to catch a reply. Some letters can be boring, or phrased politely and infer no response is required.

Apart from flu wiping me out for a week and no letters were written then, averaged over the course of the month, I have definitely written more than one letter a day. I am not disappointed, although I did start the month expecting to be able to write daily. I did also fail the Challenge A Day with the writing prompts. On days I could write, I didn't always use the prompt. Do writing prompts help? 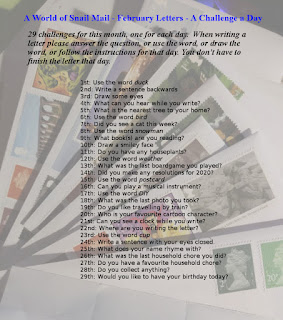 Overall, I think it has been a good InCoWriMo/LetterMo. I hope everyone received at least one surprise (or first) missive. I also hope the person behind the alternate InCoWriMo site (the one with the year in the URL), will be OK, and my thoughts are with him.
Posted by M at 19:12 No comments:

End of the first week in February

I have to admit "defeat" this year for InCoWriMo & LetterMo. Am I a bit disappointed? NO, because my body said no. I was hit heavily by one of the winter bugs going around earlier this week and struggled even mentally to open letters, not alone reply. This bug has sapped energy out of me, more than any other bugs for quite a while. I recovered somewhat today, but still feel lousy and I have lost my voice. OK, I don't need a voice to write letters, but I do need to have the energy. I wonder if I am starting to have InCoWriMo/LetterMo fatigue as this is my 9th year taking part in the one, and 7th in the other. Or whether the shortest month is not the best month for the daily letter-writing projects because of flu and colds going around. At least with February Letters, there is no pressure. Letter writing to penfriends is supposed to be enjoyable, not a chore.

It sounds so simple, to write a letter/postcard a day. And it can be, but not when you are severely under the weather. I couldn't even pick up a pen on Wednesday. All I wanted to do was sleep. Some days, can write more than a couple of missives, and on average, should be able to make it a letter-a-day.

Some of the comments (some have already been deleted) across social media about the lack of the address list at InCoWriMo-2020, do not take into account the series of unfortunate events beholden that site's owner. I know he enjoys writing letters, and while he was seeking to delegate for 2021, I don't think anything can be done this month for this year, although in early January, I did believe there was hope. A tinge of sadness for the site, and even more thoughts for him. I hope things will be OK for him.

I hope to be back letter-writing this weekend. Stormy weather is forecast. So, I intend to either be snug as a bug in a rug, in bed, or wrapped up warm in my chair at my writing desk.

I won't have time to do a daily blog, but should have time to write at least one letter a day! I am doing InCoWriMo. Am I doing LetterMo too? Well, some of my existing penpals come from the latter and have some of their letters in my to-reply-to pile. Letters written this weekend will have to wait until Monday for posting - missed the Saturday collection and no collection on a Sunday - we don't want those letters to be all cold in the postbox, do we now?

I wrote just the one letter today, although there are just under 3 hours left so there is time to write another. I did manage to write duck in my letter. Well, I used the plural form, but still, needed to write duck before the s! Tomorrow is "write a sentence backwards" well, I'll make it a short sentence!

How are you all getting on? I notice on the address exchange thread, some people replying to someone's address post with "I'll write to you" - but does that spoil things, the surprise? If someone has received a lot of replies with, "You are on my list," would that put you off writing to them because you might think that they'd be overwhelmed? I'm sure in past years, at least a few people, sadly, have not received any surprise letters.