I'm still here, writing letters, trying to keep away from the elephants in the room topics. Five Questions, Answer by Snail Mail helps. After the current letter I am in the middle of writing, I will answer someone's Five Questions, posted on the A World of Snail Mail forum.

1st October was World Postcard Day, and where do I know that loves postcards? Why yes, Postcrossing. And so, for it, I requested a couple of addresses and posted them, as well as another postcard to reply to one from Russia sent during February for A Month of Letters. 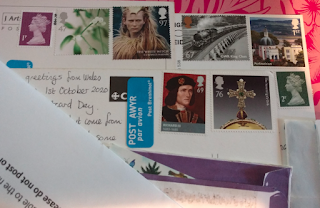 There isn't much space on the postcard for many nice stamps. I wanted to use up some of the older stamps than buy the new stamps of the new value for sending by international standard / Air Mail / Post Awyr / Par Avion! 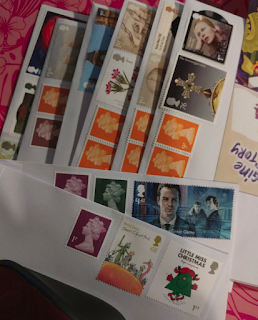 I had slowed down on writing letters recently, as there were days I just didn't feel like picking up a pen. Ideally, I want to reply between a fortnight and a month, but was running at 6 weeks for a few letters last month. I've found my mojo again.

I have written and sent over 365 letters this year, and it feels great! I should surpass 400 before long. I do tend to slow down in December, but whether I will this year, I don't know. Letters bring joy.