Since my last post about used stamp re-usage, the person still didn't stop. She blocked me in July after she put an image of yet another used stamp being used for postage. I have had a friend send me screenshots.

This was posted in mid July. I have no idea why she uses By Air Mail labels on her mail from Northern Ireland to England or Wales. For a different but used Mr Men stamp (shown in last post), she said that it was brand new! 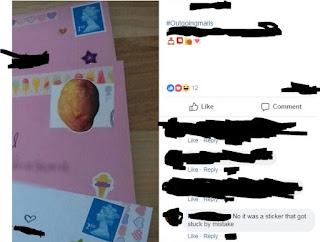 My friend shared with me a screenshot of another re-used used stamp image after I was blocked from seeing this person's post. I don't know what the "No it was a sticker that got stuck by mistake" comment means but was it an excuse/explanation for the mark on the right on the potato stamp? That mark is a postmark. She must think we were born yesterday.
Posted by M at 22:17 No comments: