Earlier this month, Royal Mail issued some stamps commemorating 150 years of the Rugby Football Union. I bought some 2nd class and some 1st class stamps, plus one £2.55 stamp. I didn't bother with the £1.70 value. 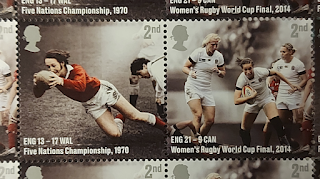 They aren't the most exciting of stamps, and I still have a few of the James Bond issue from 2020. I recently went to see the new film, No Time to Die. I like Hugh Dennis! 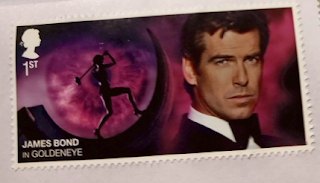 On the foreign stamp front, I still get a lot of the chrysanthemum global forever stamps on incoming mail. I do like the postmark the USPS applied - it came out quite tidily. 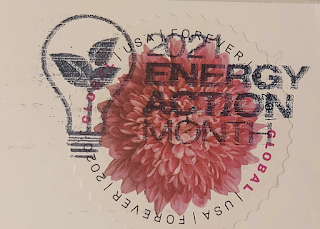 As I sent out some postcards on World Postcard Day through Postcrossing and they have mostly all arrived at their destinations, my address has been given out to Postcrossers. This stamp, one from Hungary fascinates me... There is a hole, the bit scrubbed out by the Hungarian resistance when Russia invaded and put a symbol in the flag. Timing was quite poignant because on a television programme, The Repair Shop, I watched just before one I wanted to view, there was a woman who brought in a teddy bear in need of some tender loving care, one that had been given to her as a refugee child from Hungary in an Austrian camp. 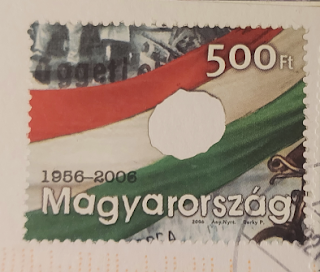