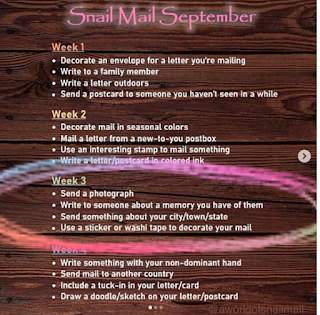 As Week 3 of Snail Mail September draws to a close, I thought I would give an update on how I am doing.
I wrote a letter outdoors for week 1, when the sun was shining and the birds were singing. I sat outside in the front garden, glancing up from the letter every now and again, to watch the world go by.
For week 2, I wrote in coloured fountain pen inks. I was able to post one letter in a postbox I'd never fed before. I always use interesting stamps but didn't put in an entry for that.
For week 3, I have used washi tape. I usually use washi for sealing up letters, and a few stickers too. I have plenty of washi tapes and stickers, but sometimes forget to use them.

I have used wax seals on many of the letters I have sent, but I have forgotten to take pictures of them, or they've turned out a bit blurry/not quite all in focus.
(pictures taken from @aworldofsnailmail on Instagram)
So, with one week and a bit remaining of September, I intend to write some letters to be sent overseas, include some tuck-ins, and perhaps attempt a doodle. I wrote something with my non-dominant hand in February.
I'll come up with some new prompts for February Letters. What would you like to see in them? What didn't you like from this year's selection of prompts (list up on my previous blog entry)?